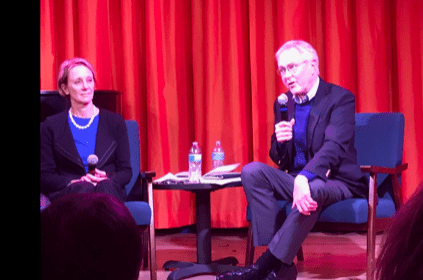 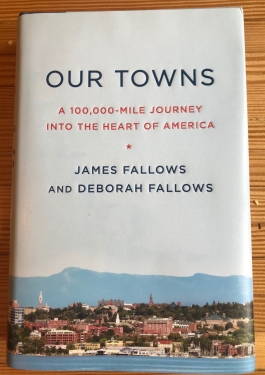 I went to see Deborah and James Fallows last night at City of Asylum, a marvelous literary non-profit, restaurant, event space and bookstore on the North Side of Pittsburgh.

While we were making Moundsville last year, I bought and read the Fallows’ book Our Towns: A 100,000-mile Journey Into The Heart of America. It’s the result of dozens of trips they took to American towns, including Pittsburgh, between 2012 and 2017, in a single-engine prop plane.

What inspired me most reading the book was their basic approach to reporting, which Dave and I were slowly figuring out in our parallel Moundsville adventure.

As James Fallows, a longtime Atlantic correspondent, said last night in presenting the book, his advice to anybody seeking to escape the poison of national politics is to visit towns “and don’t ask about national politics or anything they’ve seen on cable news, just ask people about their lives.”

We usually begin our visits talking about dollars-and-cents topics – how the economy was doing, whether businesses were moving into downtown or away from it, how the schools were funded and how well they were preparing students for opportunities in the area or beyond.

It’s what Dave and I ended up doing while making Moundsville, mostly because our questions about national politics yielded such predictable, cliché answers. The stories about people’s lives, jobs and families were the ones with depth and heart.

Our Towns is a rich argument for assessing the reality of the current moment, grieving the past when necessary, and then getting on with it. The Fallows’ don’t pretend to have the policy answer to how to rebuild the middle class out of an economy currently based, in many places, on $10ish-an-hour services jobs. There are no utopias. Change happens slowly, and it starts by acknowledging the truth of people’s lives, and by cheering their successes, as loudly as possible. It’s the only way to avoid the traps of fantasy and nostalgia, and their dire political consequences.

After our current Gilded Age, the national mood will change again. When it does, a new set of ideas and plans will be at hand. We’ve seen them being tested in towns we never would have suspected, by people who would never join forces in the national capital but who work together “at home.” Their projects, the progress they have made, and their goals are more congruent than even they might ever imagine.

The last chapter of Our Towns is a checklist of “the traits that distinguished a place where things seemed to work.” These include:

People work together on practical local possibilities, rather than allowing bitter disagreements about national politics to keep them apart.

They have, and care about, a community college.

They have distinctive, innovative schools.

And this: People know the civic story.

The future of Moundsville the town is unclear to me. After all, it doesn’t have a community college, or a big employer promising a future of good middle-class jobs. Like a lot of places, it’s been getting progressively poorer. There is hope, but not all towns will last forever.

What Moundsville does have is a great story, and our goal in making the movie, like the goal, I think, of Our Towns, was to show that the way forward for all of us is to tune out the other stuff and give depth and dignity to the true story of every place. This can’t be happening often enough.