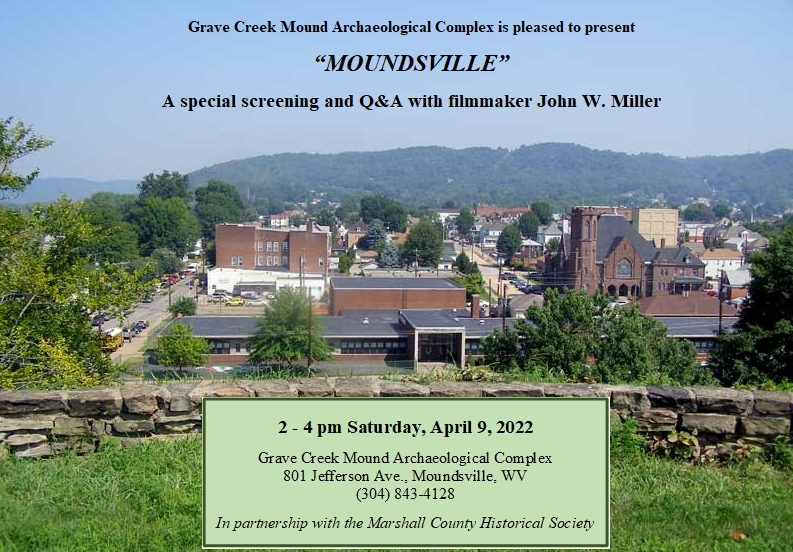 For the first time ever, our PBS film Moundsville is going to be screened at the actual site of the Grave Creek Mound, built by the Adena people over two millennia ago. The press release pasted below has all the details, except for this one: We’re going to donate our screening fee to Rose Hart’s excellent Appalachian Outreach charity, which is featured in the film and where a little means a lot.

MOUNDSVILLE, W.Va. — Grave Creek Mound Archaeological Complex in Moundsville is pleased to host filmmaker John W. Miller for a screening of  “Moundsville” on Saturday, April 9, 2022.  The program will begin at 2:00 pm with an introduction to the film by Miller and will be followed by a question-and-answer session. The event is held in partnership with the Marshall County Historical Society.

Directed by David Bernabo and John W. Miller, “Moundsville” tells the story of a classic American town through the voices of members of its community. Individual interviews are woven together to tell Moundsville’s story including its prehistoric Native American burial mound, white settlement, growth, prosperity and decline of local industries, the town’s first Black mayor, business in the age of Walmart, and hopes for the future. After the screening, the  audience is encouraged to ask questions and discuss Moundsville’s past, present and future.

John W. Miller has worked as a writer, journalist, and filmmaker for over two decades, covering 45 countries on six continents. “Moundsville” is his first feature documentary.

“I became fascinated by Moundsville because it is the most archetypical American town I’ve ever seen,” said Miller. “And I was proud to help create a space where the people of Moundsville could tell their own story, without a voiceover or outside experts.”

Miller grew up in Belgium and was a staff reporter for the Wall Street Journal from 2004 to 2016. He worked in Brussels as a foreign correspondent, and later moved to Pittsburgh to cover global mining and metals stories. An extensive and versatile writer, he has covered steelmaking in Ohio, strawberry farming in China, diamond mining in Africa, European Union and World Trade Organization law, the World Cup, Major League Baseball, and the Tour de France. The Wall Street Journal has placed 60 of his stories on its front cover, and he has received awards from the National Press Foundation and the German Marshall Fund. Miller continues to find relevance in Moundsville and West Virginia’s people and culture among the current events that continue to shape American lives since his film opened in 2018.

Operated by the West Virginia Department of Arts, Culture and History, Grave Creek Mound Archaeological Complex features one of the largest conical burial mounds built by the Adena people between 250 – 150 B.C. and ranks as one of the largest earthen mortuary mounds anywhere in the world. Exhibits and displays in the Delf Norona Museum interpret what is known about the lives of these prehistoric people and the construction of the mound. The complex also houses the West Virginia Archaeological Research and Collections Management Facility.

Admission to Grave Creek Mound Archaeological Complex is free. The Delf Norona Museum, located at 801 Jefferson Avenue, is open 9 a.m. to 5:00 p.m. Tuesday through Saturday and closed Sunday and Monday. Access to the Mound and other outdoor areas closes at 4:30 pm.

For more information about activities and programs at Grave Creek Mound, contact Andrea Keller, cultural program coordinator, at (304) 843-4128 or andrea.k.keller@wv.gov or visit www.facebook.com/gravecreekmound and www.twitter.com/gravecreekmound.