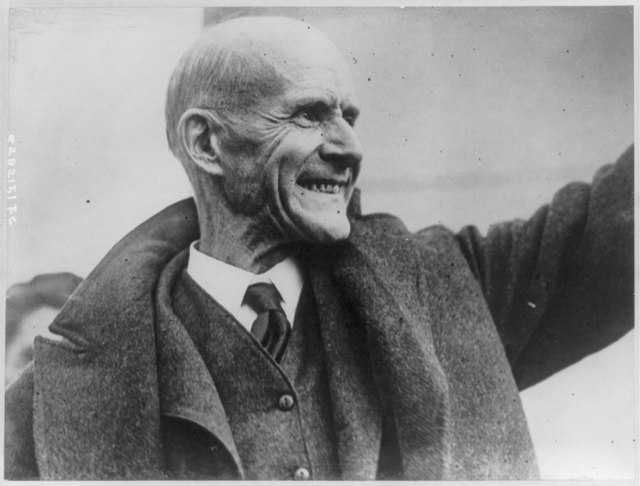 American history is a hall of mirrors, reflecting back any current insanity with tales just as cruel and crazy. Here a prominent politician with popular support was jailed in clear violation of his constitutional right to free speech. It can’t happen here? It has happened here. (Our mirror is Moundsville, WV, and you can see the PBS film here.)

Debs’ popularity didn’t matter. He had to go down because, as the fighting in Europe neared its conclusion in the summer of 1918, he’d started touring the Midwest, speaking out against the war in Europe, backing Russian revolutionaries, and decrying capitalist exploitation of workers.

The Ohio speech that got Debs slammed away, at a socialist picnic in front of around a thousand people, is worth reading in its entirety. (Or you can listen to actor Mark Ruffalo reading an excerpt.)

“It is extremely dangerous to exercise the constitutional right of free speech in a country fighting to make democracy safe in the world,” said Debs. The working classes, he declared, “have never yet had a voice in declaring war. If war is right, let it be declared by the people – you, who have your lives to lose.”

Eloquently, he described the suffering of coal miners and juxtaposes it with the comfort of coal mine owners:

In the present system the miner, a wage slave, gets down into a pit 300 or 400 feet deep. He works hard and produces a ton of coal. But he does not own an ounce of it. That coal belongs to some mine-owning plutocrat who may be in New York or sailing the high seas in his private yacht; or he may be hobnobbing with royalty in the capitals of Europe, and that is where most of them were before the war was declared. The industrial captain, so-called, who lives in Paris, London, Vienna or some other center of gaiety does not have to work to revel in luxury. He owns the mines and he might as well own the miners.

He invoked Christ: “The Man of Galilee, the Carpenter, the workingman who became the revolutionary agitator of his day soon found himself to be an undesirable citizen in the eyes of the ruling knaves and they had him crucified.” He decried the recent imprisonment of his friend, the feminist socialist activist Katie O’Hare, under the Espionage Act:

All who know Mrs. O’Hare know her to be a woman of unquestioned integrity.’ And they also know that she is a woman of unimpeachable loyalty to the Socialist movement. When she went out into North Dakota to make her speech, followed by plain-clothes men in the service of the government intent upon effecting her arrest and securing her prosecution and conviction—when she went out there, it was with the full knowledge on her part that sooner or later these detectives would accomplish their purpose. She made her speech, and that speech was deliberately misrepresented for the purpose of securing her conviction. The only testimony against her was that of a hired witness. And when the farmers, the men and women who were in the audience she addressed—when they went to Bismarck where the trial was held to testify in her favor, to swear that she had not used the language she was charged with having used, the judge refused to allow them to go upon the stand. This would seem incredible to me if I had not had some experience of my own with federal courts.

And he called for international revolution:

Yes, in good time we are going to sweep into power in this nation and throughout the world. We are going to destroy all enslaving and degrading capitalist institutions and re-create them as free and humanizing institutions. The world is daily changing before our eyes. The sun of capitalism is setting; the sun of socialism is rising. It is our duty to build the new nation and the free republic. We need industrial and social builders. We Socialists are the builders of the beautiful world that is to be. We are all pledged to do our part. We are inviting—aye challenging you this afternoon in the name of your own manhood and womanhood to join us and do your part.

For America, that was all too much. Debs was put on trial that fall, charged with persuading American workers to resist the draft.  “I believe in free speech, in war as well as in peace,” Debs said in court. “If the Espionage Law stands, then the Constitution of the United States is dead.” He told the court that he could “look the jury in the face. I look the world in the face, for in my heart no accusation of wrong festers.”

Debs was found guilty, and sentenced to 10 years in prison. The Supreme Court upheld his conviction the following March, ruling that sympathy with draft-dodgers made Debs guilty of the same treasonous offense. His conviction, the Washington Post said, “serves notice to all that disloyalty and sedition, even though masquerading under the guise of free speech, will not be tolerated.” (Erick Trickey’s 2018 article in Smithsonian Magazine is an excellent and erudite treatment of Debs’ imprisonment and the context around it.)

In the April, 1919, Debs was arrested by U.S. Marshalls (with the help of a “reporter-agent” from the Cleveland Plain Dealer, according to one newspaper account) and, after a dinner in Wheeling with a reporter and warden Joe Terrell, shipped by interurban railway to Moundsville, which housed West Virginia’s state penitentiary. Federal prisons were too crowded to take him in.

Instantly, the case became a nationally contentious issue, turning Debs into a traitor for some and free speech martyr for others.

“The arrival of Debs at the prison resulted in the tightening of the guard maintained around the walls,” the Greenbrier Independent reported on its front page April 18, 1919.

“I enter the prison door a flaming revolutionist, my head unbowed, my spirit untamed, my soul unconquerable,” Debs told a reporter before becoming inmate 2253. “Gene,” the warden Terrell told him. “Once upon a time when I was a railroader and you fought for our union cause in an important strike you were my hero. Just now you are my prisoner and I am your keeper.”

The Greenbrier Independent explained that “the warden’s precaution [sic] are said to be justified by “threats of formation or rescue party among the elements of the foreigners employed in the coal mines and other industries of the Wheeling district… No anti-American propaganda will reach Debs, nor will he be allowed to send any out…. He has written and spoken his last words on ‘flaming revolutions’ according to prison authorities.”

Debs’ history was well-known, especially among workers and union leaders. In 1870, he’d left his hometown of Terre Haute, IN, to work in train factories, becoming president of American Railway Union in 1893. He’d already spent time in prison, for his role in the 1894 Pullman workers strike. Eloquent and charismatic, he toured the country making fiery speeches and becoming America’s first-ever socialist star. Around 1900, he cofounded the American Socialist Party. A few years later, he helped found the Industrial Workers of the World, or IWW.

In Moundsville, Debs continued to campaign for his cause, publishing columns in newspapers. He even penned a letter to Hellen Keller. “Your bold, fearless, uncompromising spousal of the cause of the workers won at once my admiration and respect and endeared you to me beyond words,” he wrote.

In June, 1919, Debs was moved to a federal prison in Atlanta. “Moundsville was in a mining region, and there were several thousand friendly miners nearby,” Debs told the St. Louis Star and Times in 1922. “So after two months, in deep secrecy, they took me to Atlanta, where the federal prison has very safe surroundings for prisoners whose offense consists of liberal opinions.”

In 1920, Debs ran for president from prison in Atlanta, drawing 3.4% of the vote. President Harding freed him on Christmas Day, 1921. A White House statement said:

There is no question of his guilt. … He was by no means, however, as rabid and outspoken in his expressions as many others, and but for his prominence and the resulting far-reaching effect of his words, very probably might not have received the sentence he did. He is an old man, not strong physically. He is a man of much personal charm and impressive personality, which qualifications make him a dangerous man calculated to mislead the unthinking and affording excuse for those with criminal intent.

Debs died in 1926 at age 70. Many Americans have forgotten Debs, but he remains a legend to American socialists and labor leaders. In 1979, Bernie Sanders made a documentary about him.

Debs spent only a couple months in Moundsville, but the story of that West Virginia passage is revealing. The press accounts illustrate how easy it is for Americans to vilify their own citizens and, when seized by fear or fashion, step on each other’s rights, without much thoughtfulness at all.

In Moundsville, “Debs was a model prisoner,” the governor of West Virginia John J. Cornwell told reporters when he was transferred to Atlanta. “When he was brought to the West Virginia after his conviction under the Espionage Act, he was told by Warden Terrell that he would be treated as any other prisoner of his age. He was given work as an attendant in the hospital. He attempted no propaganda work among the prisoners of Moundsville.”