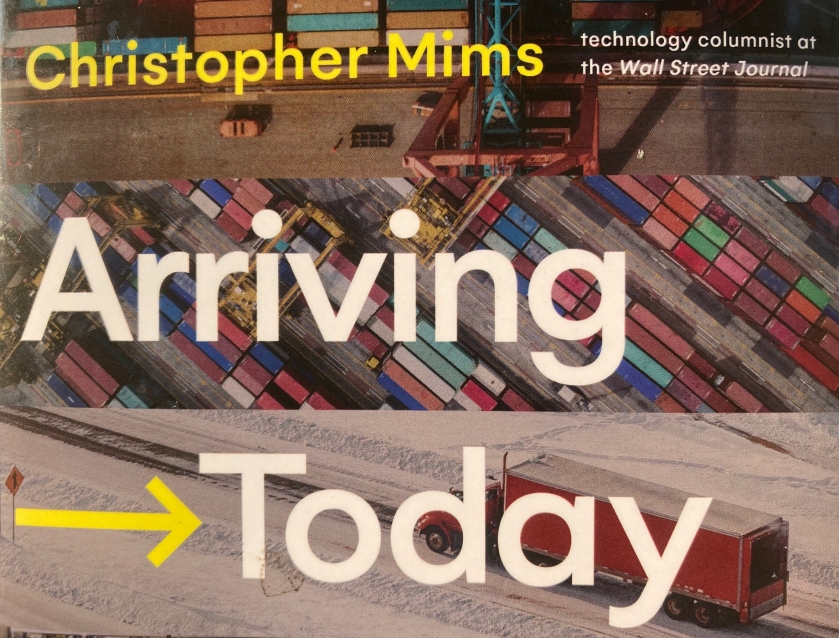 The economy shapes the geography of America. In the 19th century, the industrial revolution spawned cities, factories, and row homes, a dense world of red brick and smoke. In the 20th, mass production of cars and drywall threw up green and white suburbs, and global trade and multinational corporations powered shopping malls and chains, gutting small business artisans and manufacturers in places like Moundsville, WV. (Our PBS film, Moundsville, is about how these cycles have played out in a specific town.)

In the 21st century, the capitalism of the moment is again sculpting our environment, in part driven by a global logistics industry that supplies us, quasi-instantly, with what we want, and buy online.  That’s why Amazon is building fulfillment centers and hiring workers, why cities like Washington and San Francisco are so wealthy and the Rust Belt poorer, why McMansion exurbs are booming, and why remote work is thriving, threatening downtowns and commercial real estate markets.

That’s the story Wall Street Journal tech columnist Christopher Mims tells brilliantly in a new book out this week, Arriving Today: From Factory to Front Door – Why Everything Has Changed About How and What We Buy, a smart, deep, and detailed dissection of, and meditation on, the trans-Pacific supply chain that starts in Asian factories and ends at American front doors.

A click to the shopper; a hard journey and way of life to seaman, captain, warehouse picker and, usually, several truck drivers. Mims follows the journey of a USB charger, from the factory in Vietnam where it was made, via barge, ship, truck and conveyor belt, to buyer. It’s a clever way of explaining global trade, that’s been used in books like The Travels of a T-Shirt in the Global Economy, and the Mark Kurlansky-style canon of telling bigger economics stories via specific commodities like sugar, coffee or cod.

Where Mims’ account is unique, and more interesting, is that it’s about the development of physical global trade structures, and its focus is on the technology of what happens to goods after they leave the factory, instead of how they’re made. It’s that trading and shipping infrastructure, particularly the development of the shipping container to supply U.S. troops in Vietnam in the 1960s, that helped U.S. companies like Walmart, Nike and GAP pack American stores with foreign-made goods, turning Americans into super-consumers and decimating manufacturers in places like Moundsville.

There is a parallel political story, about why national governments decided to shred tariffs after World War Two and set up a global system of trade deals and trade dispute resolution that allowed this physical trade to flourish, and how that system is now imperiled by protectionist politics and rivalry with China. For that story, I recommend the work of Paul Blustein, Doug Irwin, or the recent book by Bob Davis and Lingling Wei, Superpower Showdown.

After leaving a factory in Vietnam, the USB charger, as Mims recounts, “has traveled more than 14,000 miles, across 12 times zones, by truck, barge, crane, container ship, crane, and truck again, all before it trundled down a few hundred yards of conveyor, flitted about on the back of a robot, and was ferried again on, all told, miles more conveyor and at least two more trucks, before being hand-carried to someone’s front door.”

The USB charger, of course, could be a coffee grinder, coloring book or sex toy. In 2020, Mims reports, 100 billion parcels were shipped worldwide, a number expected to double or triple. Is that sustainable, I asked Mims in a follow-up email interview. Not really:

These supply chains are having huge problems right now, already. What’s going on now is definitely not sustainable. To some extent, these issues are self-correcting. What we’re seeing now is what economist Willy Shih calls “supply chain oscillations”, in which spikes in demand create congestion in supply chains that leads to more congestion. It doesn’t end until there’s a big recession, or when one day businesses wake up and see demand declining for things which their customers already over-bought (like laptops and toilet paper). Then retailers pull back on orders, and the supply chain goes through yet another slump until the next demand spike. The backdrop to this pandemic-induced drama is climate change, political unrest, and the always-looming threat of armed conflict somewhere in the world. I think that companies have realized they need to source their goods from more than just the cheapest supplier, and so in this way they’ve clearly already recognized that the way they were making their supply chains leaner and leaner was not sustainable.

Mims reports in depth on crucial steps of the supply chain, from robots moving containers at a port, to a container ship, “roughly four American football fields long, or three and a half soccer pitches, and 167 feet wide that extends below the surface of the water to the depth of a four-and-a-half-story basement” that is “displacing a volume of seawater equivalent to 105 Olympic-size swimming pools.”

And he packs the book with fascinating little histories and facts about the invention of today’s physical infrastructure. After seeing Hitler’s autobahns, for example, President Eisenhower was motivated to build something similar in the U.S. As a consequence, America now has “46,000 miles of interstates and a total of 164,000 miles of highway, composed of more than 1.5 billion metric tons of material such as rock, sand, and cement.” The highway system allows Americans to travel three trillion miles a year and transport 12 billion tons of freight.

Put together, all these inventions and evolutions add up to a hyper-efficient system that’s turned the world into a global conveyor belt.

We’re living in a giant factory dreamt up by a management philosopher. Mims identifies an industrial theorist named Frederick Winslow Taylor as one of the originators of this economic dream. Born in 1856 in Philadelphia, Winslow started off as a metalworker and cut his teeth managing workers in a pump factory. He discovered that strict oversight of the industrial process combined with threats to fire underperformers allowed him to increase productivity.

Taylor would later helm a failed attempt at building a company around a novel process of papermaking. Eventually, he struck out on his own as one of the world’s first management consultants, and then he “retired” in 1901. He wrote two books – Shop Management, published in 1903 and intended for experts, and The Principles of Scientific Management, published in 1911 and aimed at a lay audience. Both were subsequently translated into every language spoken in the world’s industrializing economies, from Europe to Japan, and became foundational for manufacturers from the world over, from Renault to Mitsubishi Electric.

Taylor’s ideas were adopted by Henry Ford, who supercharged them with the conveyor belt, a concept he stole from slaughterhouses, where cows and pigs are rolled from one worker to the next, each one hacking off different parts of the animal.

With Taylorism, we live in a world where we’ve had to adapt our lives to the high speeds of machines. The result is a place where, materially, many of us live like kings, but where workers up the conveyor belt increasingly struggle to achieve lives of dignity.

Instead, they play human roles in a machine-operated world. These roles have been “deskilled,” as economists call it. “From preparing a meal in a fast-food joint to driving for Uber, countless careers that used to require a significant amount of experience and skill have now been turned into jobs that require hardly any at all.”

Mims draws a straight line from Taylor to Henry Ford to Jeff Bezos, the founder of Amazon.

Amazon (the subject of another excellent 2021 book, One-Click Fulfillment, by Alec MacGillis) has managed to implement a culture that demands total commitment to efficiency. Mims quotes an Amazon manager as saying: “People try to say it’s a family, but no, it’s a team, and a team is performance-based. If you’re not the right person to perform, they’re going to trade you or cut you. On the one hand, you could call it cut-throat; on the other hand, that’s what it takes to be a high-performing team.”

And Amazon’s way of business could become even more dehumanized, thanks to a future that could include millions of delivery robots on the world’s streets and sidewalks by the middle of 2020, which will be manufactured “like automakers make cars and consumer electronics companies make phones – literally by the boatload, in the contract manufacturing capitals of East Asia and Southeast Asia.”

One-click shopping, he said, “is definitely an acceleration of trends that have been in motion for a long time. Everyone forgets that the Sears catalog was the original Amazon. And that Jeff Bezos explicitly modeled Amazon on Walmart, in some ways. Put the two together, add the internet, and the resulting ecommerce boom has so transformed how we shop that it’s eaten a far larger share of retail than either of those companies ever could hope to.”

In reporting the book, Mims said he learned that “our industrial landscapes and economies are natural systems, like any other ecosystem. It’s an obvious idea — we’re natural, after all, so nothing we create can be other than part of nature — but it has tremendous power to reframe how we look at things like dying Rust Belt cities.”

change, they die, they are buried under ash and oceans, and, often, they disappear completely. And we have to accept that the same can happen to whole communities. This doesn’t mean we should give up on them. I like the idea of transforming their economies in creative ways. A lot of old Rust Belt towns west of the major population centers of the east coast are becoming hubs for warehousing and ecommerce fulfillment, for example. And tourism is a possibility — people don’t even realize how fantastic is the food in the far west of West Virginia, which attracts day-trippers and even exurban commuters from Pittsburgh. It’s just, we do have to know that for some of these towns, their reason for being may simply have ceased to exist. That is ok. People persist — cities? Not so much. The very first city humans ever created, Uruk, has since been more or less completely erased.

As I explained to Mims, that is the epiphany that led us to make Moundsville: In this West Virginia town, the Greek chorus reminding us that civilizations ebb and flow is a heap of dirt standing at the corner of Jefferson and 8th.

So how are we to live in this world? In Moundsville, we show Americans coping the best they can, starting small farms, manufacturing kitchen cabinets and glass, and developing a tourism industry around ghost-hunting. So that’s one answer. Even in poorer places, America is still a decent place to live. It’s not as prosperous as in the 1950s, but you can make it.

In Mims’ view, the ideal outcome is that “workers regain a measure of control over the circumstances of their work. And don’t forget that, by value of goods produced, the USA is still more or less even with China.”

It’s important, he said, “not to get hung up on the tech and the management philosophy stuff: Most of this could be solved by a reinvigorated OSHA, and making it easier for workers to unionize, and the like. Neither party seems to care that much about improving the circumstances of labor by clamping down on labor practices like using subcontractors (leading to the so-called “fissured workplace”) and the like. It’s bizarre.”

In the end, when thinking about corporate practice or economic policy, we do the right thing by paying attention to what is actually happening to the people involved. That is the way of any work done well, be it journalism, religion, or dentistry. And Mims, in this important and fascinating book, has added the best kind of journalism to this good work.